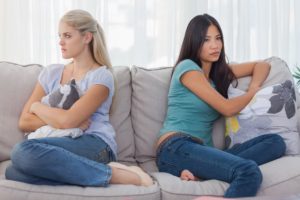 I am in the process of breaking up with my girlfriend of five years. It has been a very difficult break-up and one of the sticking points is that we had been living in an apartment which is mine. I had inherited it from my family before I even met her. She claims, however, that she has a right to part of the apartment because she was my domestic partner, and she is also refusing to move out. I don’t want it to escalate anymore, but I also don’t want her to take my apartment. What do I do?

I am sorry to hear you are having these difficulties. I know breaking up is a difficult process especially after a long relationship, and unfortunately, it doesn’t always feel fair. Having said that, unless you have some type of written agreement stating otherwise, it doesn’t sound like your ex-girlfriend has any rights to your apartment; the apartment was yours, free and clear prior to the relationship.

Even if you were a married couple (which, hopefully with the new introduction of New York State legislation by Eliot Spitzer, will be available to same-sex couples soon) your spouse would not be entitled to equitable distribution (a splitting of marital assets) to property like this, which you inherited, and acquired prior to the marriage.

Rights for the partner without assets in a same sex dissolution is an important legal battle for our community. Same-sex couples need to be allowed to marry so that among other things, the “non-monied” partner has a right to share in the assets acquired by both in the course of the relationship in the event of a dissolution. In your case, it is just as important to protect the individual with assets from being forced to share them when that was never their intention.

In terms of getting her to move out, because she has lived there for more than 30 days, she has “tenancy.” This means you can’t just tell her to leave. Assuming you don’t have a lease with her, you have to give her 30-days notice of your intent, and then if she still doesn’t vacate, you would have to bring a notice to cure and a formal eviction proceeding in housing court, certainly an uncomfortable process while living with her.

As I always say, a simple, inexpensive agreement put in place beforehand clearly articulating your shared expectations is a good way to avoid these issues.

*This column is not a consultation with an attorney and should in no way be construed as such or as a substitute for such consultation. Anyone with legal issues or concerns shohuld seek the advice of her own attorney.