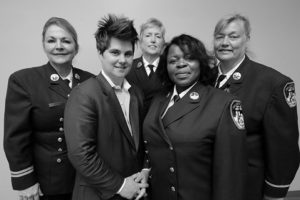 Awarded landmark appellate decision recognizing the equal application of the presumption of legitimacy to same-sex marriages.

Won significant EEOC determination of disparate pay practices on behalf of a class of employees of the City of New York.

Won a settlement of lawsuit charging sexual orientation discrimination against one of the largest banks in the U.S.

Fought for an accurate birth certificate for transgender man and won.

Negotiated severance package for an individual experiencing discrimination and harassment regarding sexual orientation in the workplace.

Took an international restaurant chain to task for discrimination based on race and won a major decision against them.

Stood up against transgender discrimination and won major settlement of a lawsuit against a national company.

Won a decision with the NYS Labor Department in favor of woman who was sexually harassed by a large international financial institution.

Won a landmark decision that allowed New Yorkers to exercise their First Amendment right to assemble without fear of arrest.

Negotiated severance on behalf of an 18-year veteran of a major national retailer.

Awarded a published decision prohibiting the police from harassing homeless New Yorkers by wrongfully arresting them.

Represented police officers who were wrongfully arrested and modified by the New York City Police Department and won.

Successfully challenged a Supreme Court Justice’s determination that medical evidence was necessary for a name change.

Won a decision in the Equal Employment Opportunity Commission for a man being sexually harassed on the job.

Fought for and won custody for a lesbian couple, in the best interests of the child, instead of custody being awarded to the biological mother.

Won a major decision in Federal Court denying an international restaurant chain’s motion to sever the claims of multiple customers in different states.

Won a major decision in Federal Court denying a school district and a bus company’s motion to dismiss claims of discrimination based on national origin.